It’s been said, I think by Alanbrooke, that strategy consists in the proper handling of reserves. Looking at the situation with this framework, what can we say about Iraq? It’s now been a year since the announcement of “The Surge”, the deployment of the US Army’s strategic reserve in Iraq. And what’s happened?

First, it helps to think about an army as a flow, not a stock concept. The size of an army is really the size of the force it can maintain for a given period of time; this is a function, mostly, of either the provision of soldiers as replacements or the rotation of units out of the theatre of war. Eventually, as in the second world war, even a replacement-based army has to take whole units out of the line, but let’s keep it simple.

The surge was accomplished, essentially, by boosting the flow temporarily; bringing forward deployments from this year and the next. This made it possible to temporarily increase the strength by 28,500 men; but the crucial point here is that this is a borrowing from the future. As the units that were planned to rotate back to the US do so, which they have begun doing, they won’t be replaced; the units that were to replace them have already been sent and will in their turn complete their tours of duty. Not only will the extra troops leave; the force in place will itself weaken. This can only be avoided if the US Army decides not to reconstitute its strategic reserve. The peak was 182,000 troops in October; we’re already down by almost 10,000, or in other words a division equivalent.

This would be largely academic if committing the reserve had led to decisive results. But it has not; yes, there have been three reasonable months by 2006-2007 standards, but this is a claim that requires close examination. The press has effectively taken a holiday since the summer, and the US military PR men have become very keen to quote percentages (“Violence down 60%” – down 60% on what exactly?) but never any absolute numbers. Fortunately the Brookings Iraq Index is still going.

As far as their estimate of civilian casualties goes, the peak month was November, 2006; almost a third of the fall was between then and January. The rate of enemy action was at an all-time high as late as June, 2007, and was still running at 3,000 attacks a month in September. The five worst months for multiple-fatality bombings were all post-surge. The chief evidence for surge effectiveness is the drop in US casualties since August, 2007; that was a pretty bad month itself (84), but was also the moment of the Sadrist ceasefire. It’s also noticeable that the rate of attacks on oil and gas installation went to near-zero in August as if a valve had been screwed shut; August was one of the worst months for oil production, but it has noticeably increased. However, oil products supply in Iraq is still at just over two-thirds of requirements; actually worse than during the worst period of 2006.

Electricity production is still almost one-third below target, and it only exceeded the figures for last year after the Sadrist ceasefire; it’s also worth noting that the figures exhibit a strong seasonal variation, and have improved every winter since 2003 only to decline again in the summer. (The turn of the year is also usually a low point in casualties.) Further, it’s worth noticing that the frequency distribution is not especially normal; 18 months out of 58 are over 1.4 standard deviations away from the mean, mostly on the bad side (the split is 5 low/12 high). In a nonnormal distribution you’d expect to find yourself that far from the mean at most one-third of the time, which is precisely what has happened. 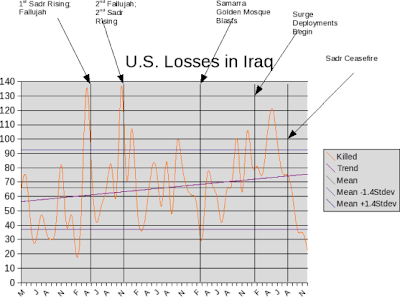 Regression to the mean has no divisions, but it’s notable that all the worst months for US casualties are associated with a Sadr crisis; his six-month ceasefire expires roughly now. The US Army has used its strategic reserves and not achieved a decision; this is historically a very dangerous strategic moment. If you examine that Brookings pdf, you’ll note that it includes some order-of-battle details; currently, some 7 US brigades are disposed around Baghdad and 3 more around the southern suburbs, and another six across the north, with one reinforced brigade in Anbar. There is currently a Polish battalion group at Diwaniyah and a National Guard infantry brigade based on Kut; nothing between them, and nothing before you get to the British brigade camped outside Basra.

It’s Sadr’s move; it always has been. And Diyala is still the battlefield; and the guerrillas still know that we’re coming. Read Phil “Intel Dump” Carter. But what the hell; snark on this issue has been outsourced to Jamie Kenny.

For extra TYR points, it seems that there was a major clash between the Iraqi Army and the Sadrists in Basra over Christmas (during which the IA discovered a cache including a *drone*). This is not going to be conducive to the renewal of the Sadrist ceasefire.