So I reviewed the rebuilt St Pancras Station about this time last year. So, in the best Stewart Brand tradition, let’s revisit it; this time of year tends to give you opportunities to revisit major railway stations.

The first good news; the square footage of blue plywood and Tyvek has fallen, and is now close to zero. However, blue plywood extermination is still not quite complete – there is a little patch of the stuff behind Betjeman’s Bar on the upper deck. Perhaps they should keep it, as a shrine to the temporary, flexible and living nature of all buildings.

Further, the station is now functioning without needing to secrete too much temporary signage; overall, the signage has improved, although there was no way anyone was going to read the waist-high portable sign holding an amended timetable for the Thameslink service, forlornly placed between two streams of people, at 90 degrees to their eyeline. But, if you visit Betjeman’s to check out that plywood, you’d better be careful you don’t miss your train – there are no indicator boards in this part of the station, and the nearest is the one outside Eurostar arrivals. (However, their selection of real ales has increased.)

Out the back, where the path from the car park leads into the station, it’s still necessary to have perma-temporary railings marking the accessible ramp; the signs haven’t quite caught up. The Tube station is improving, slowly and painfully, and the ticket hall isn’t as poorly signed as it was last year. Further, the exit from Eurostar arrivals is as bad as ever; presumably, hordes of disoriented travellers packed into the shopping centre are a feature not a bug for someone.

The grand front entrances are still bunged by construction work on the hotel; until this is finished a lot of things will remain temporary, as the original architecture makes the whole thing a single unit. And, of course, there’s a lot of other stuff going on with the tube station, the Great Northern Hotel, changes to King’s Cross station and the like. But it’s running-in reasonably well, and how many building projects of its scale can say that?

However, occasionally you run into something terrible. Check out the Midland (sorry, “East Midlands Trains”) ticket hall, which has the odd property of looking painfully bare but not austerely functional, and also has this horrible image: 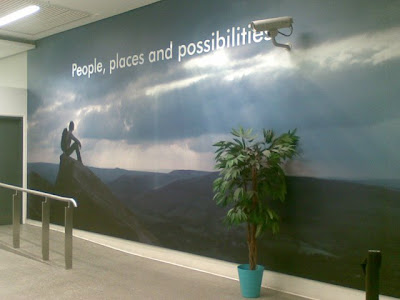 It’s the combination of the on-the-cheap shiny, the motivational-speaker bollocks, and the CCTV cam the size of God pointing at…what? that does it for me…