While I’m clearing up things I drafted but didn’t have time to post, I took this photo at the Musée des Confluences in Lyon earlier this year. 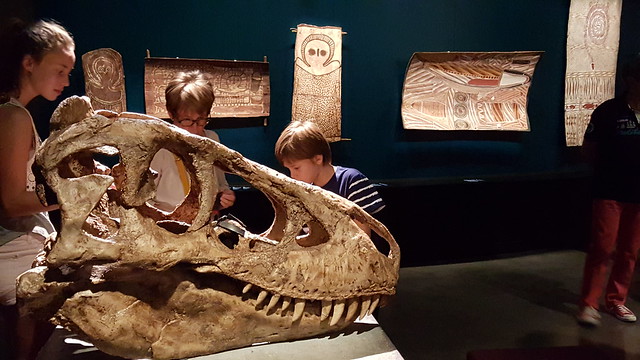 As you can see, the museum seems to think it is appropriate to hang Australian Aboriginal artworks with the dead dinosaur, despite them being contemporary, made by humans who may well be still living, and nothing to do with dinosaurs. I don’t know enough to date them stylistically – I can identify the late 60s-and-after Papunya style but that’s it – and all the label would tell me was that they had been acquired after 1968, which might put them in the context of the artistic revival of that period or just be a coincidence.

The weird hang probably isn’t, alas, a coincidence. In another section of the museum, I found a collection of industrial artefacts (a Renault Trucks V12 diesel, a power loom, a Minitel, that sort of thing) classified under “Creation” although a (rather impressive) collection of Native American ones wasn’t. To be honest the display didn’t say anything about the people who built the V12, at a RVI plant only a few miles away across town, so at least they didn’t just erase the creative contribution of the Native Americans, they did it to the French working class as well.

The Australian collection, which is actually quite impressive, is contextualised as being part of the struggle for native title. Well, when it isn’t put with the dinosaurs, that is. On the other hand, all the Native American stuff originates, according to the labels, from the Pontifical Missionary headquarters’ collection, and there is not one word of how missionaries might have come to own all this stuff. If anything is problematic, it is clearly somebody else’s problem, and not our fault, guv.

The institution’s deeper story explains a bit of this. The huge, techno-flashy building was put there, after years of wrangling and cost overruns of pharaonic proportions, because they wanted to press the button marked Arts and have the money roll into an ex-industrial area that (apparently) needed redeveloping. Did I say flashy? 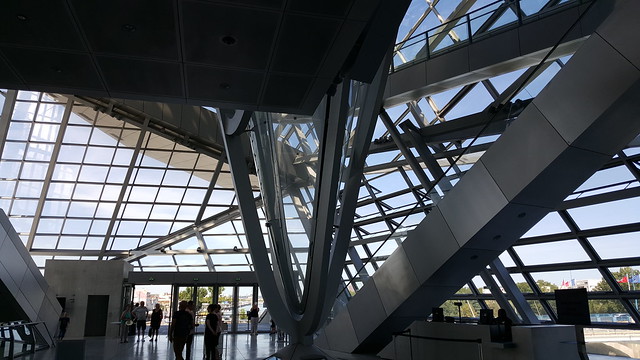 Flashy. At some point, they had a Dome moment; the building was going to look great, but what was going to be in the building? The answer was to pass the hat around every local institution that had a museum, and regroup all their stuff in the new one. This risked just having a lot of assorted objects without any organising theme or project, and in fact that’s what they got. The answer to that was to make a virtue of it. It would be – ah – like a princely cabinet of curiosities in the Enlightenment, a post-modern celebration of historicity and diversity, a universal museum like the British Museum, a place where different streams came together, as the site itself implied.

That filled up the press release and the grant applications, but it didn’t give it the sort of definite steer that would keep it from just drifting towards the assumptions of the institutions that originally collected all the stuff. Of course, you can make a career precisely out of talking about why missionaries put all this stuff belonging to other people in our museum, and the British Museum has developed a speciality in just that. You can mock it, but at least they don’t hang the Aboriginal art with the bloody dinosaurs.

4 Comments on "Those aren’t dinosaurs."