The fantastic Schibboleth blog recently ran this recipe, and I can tell you that it makes an absolutely superb steak.

You don’t really think of Vienna as steak country but of course it was old central Europe’s stockyard city, with its vast rail-fed central markets. When I lived there, although the markets were no longer in use, the railway line into them was still operational, with the signals powered up in front of my window, but I think I saw a train on it maybe once. Instead you could walk up the line, under the motorway viaducts, and explore the vast halls, built in Victorian cast-iron prefab technology. This photo doesn’t quite get the scale although it comes with a potted history: 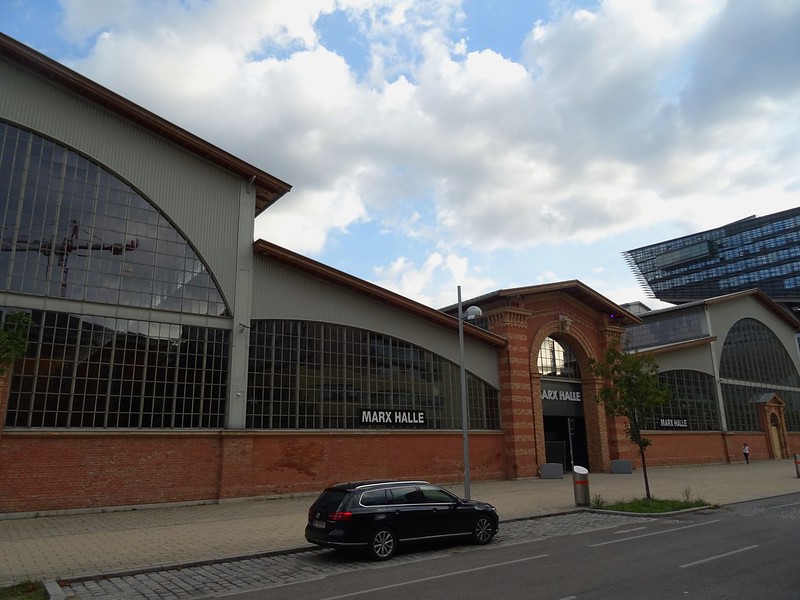 I went in the back way in – the front was under these enormous statues: 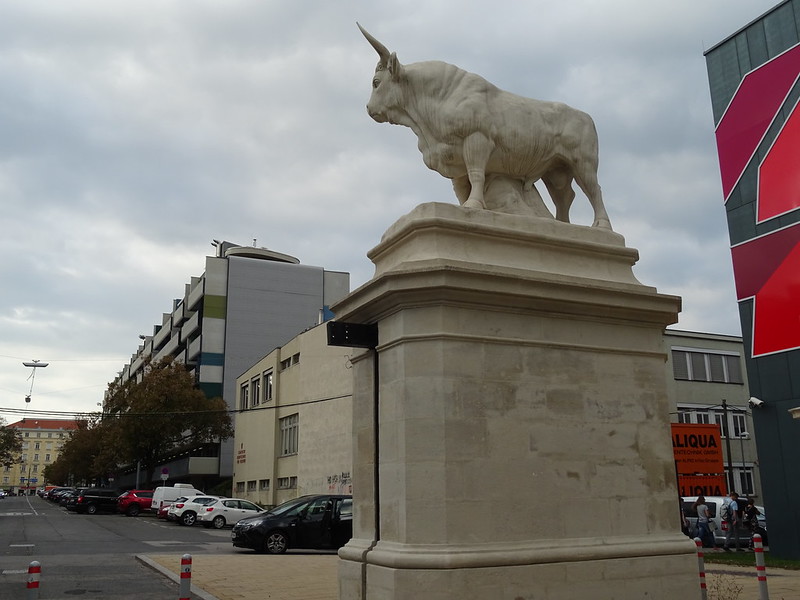 It was an anti-semitic mayoral candidate who said that “Wien darf nicht Chicago werden”, but in important ways it already had been, in the nostalgic past he supposedly wanted to return to, and the conflict this reveals is roughly what Shaya is blogging about. And there’s something ambivalent about raising a statue to your dinner anyway.

Anyway, the blog post hinges, like the recipe, on garlic and smells, which reminded me of Katharine Whitehorn’s cookbook Cooking in a Bedsitter. I was given, or more accurately pinched, my mother’s copy of this when I went to university, and it deserves a reappraisal. In terms of cooking, the book is a sort of cut-down punk version of Elizabeth David’s popularization of supposedly Mediterranean diet, repackaging the insights for a cook with one gas ring if you’re lucky, and as such it works really well. Not surprisingly – I just learned from that link that she knew David and in fact cooked for her. Penguin gave the book a spectacular edition, using the first-generation Penguin Modern Classics design with a robust dose of Helvetica over a full-cover photo, and what could be more of the time than good cooking for the underhoused? The weird bit, though, is that the book is constantly on about smells, so much so that it gave me the strong impression something changed dramatically in British attitudes to smell about the time it changed in attitudes to food. This shouldn’t be surprising – taste and smell being closely coupled, and good food the consequence of good cooking – but it’s still weird. You’re constantly offered advice about how to conceal the fact you’re cooking at all, or avoid anyone noticing you used an onion. Does anyone care any more? Perhaps the much-discussed improvement in British food happened because we stopped pretending.

Whitehorn’s target readership was the great wave of postwar students, but perhaps this argument it fits too well with the pretensions of that 1960s generation. Nothing would suit them more than thinking the key was just to throw aside outdated hang-ups. An alternative reading is that nobody lives with their landlady any more – one of the many consequences of the assured-shorthold tenancy was that the old landlord class sold up, and were replaced by the new financial investors. Even if they might be the same sort of people, the new legal form created a new form of exploitation. They don’t want to judge you; they just want to collect every penny you don’t spend on food.