I took these photos of Berlin’s forever-delayed airport terminal this summer. It’s just turned out a few days before the latest attempt to announce an opening date that the thing is still nowhere near ready after 2000 days of delay and twelve years of construction. Meanwhile, the executives bicker, the stakeholders wrestle for power, and the contractors are on time-and-materials, so at least somebody’s happy. 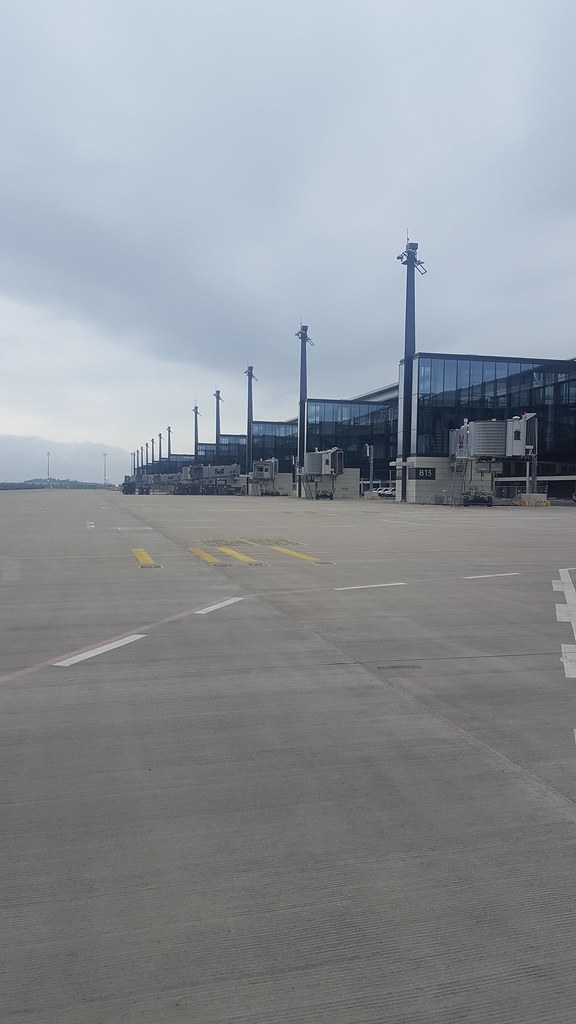 One thing that came across very strongly on the site is that this could be a preview of the future. Outside, everything is at once brand new and also being overtaken by dereliction. The car parks and access roads’ blacktop is perfect while advanced colonies of pioneer plants take over what they can. Every strand of weldmesh in the security perimeter is present and correct, but it’s also uniformly rusted to the same shade of iron oxide, as if deliberately weathered to be in keeping. Inside, though, the real story doesn’t take long to impose itself.

The interior is gorgeous – its design is supremely austere and the architects chose to banish the shops deeper into the building to provide more generous circulation spaces, and the materials are almost comically superb. But the second thing you notice is that everywhere, access panels into trunks and closets are hanging open and hanks of cabling have been pulled out. You’re in a failed smart city. 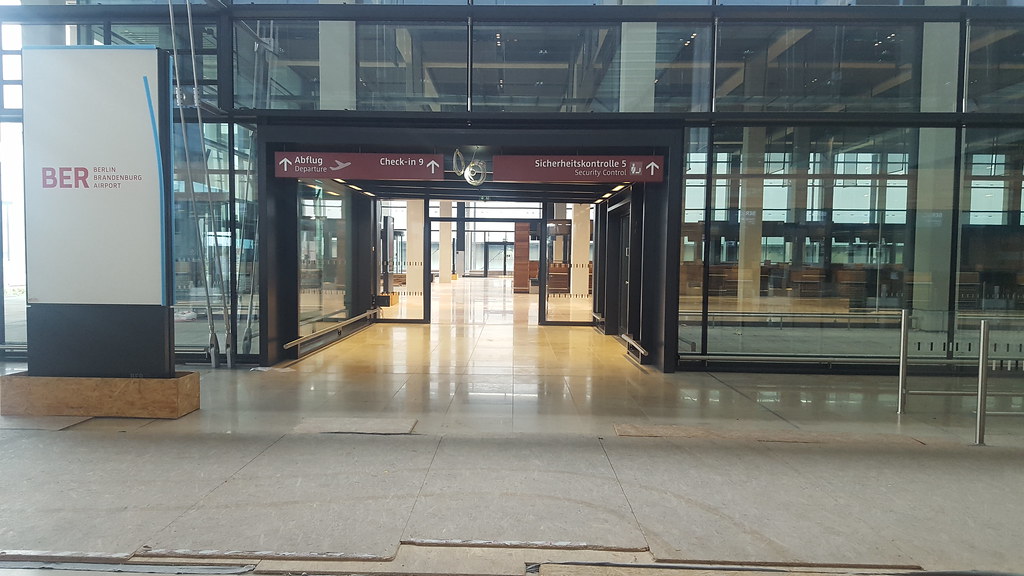 The smart city concept, back when it was fashionable, was all about the unplanned protocol layer integration of sensor networks centred on the user, or better, citizen. But in practice it has turned out to be little better than a branding concept for Huawei CCTV systems or your favourite Big Systems Integrator.

Airports are a good test case for this because they are so dense with building services systems – multiple and different telecoms networks, main and failover power supply, very complex air-conditioning, smoke evacuation, CCTV, both own-use and tenant radio systems, baggage handling conveyors, weird retail-sector surveillance – and so politically complex, with dozens of stakeholder groups (airlines, retailers, different police forces, air traffic control, port health, you name it) crammed under the roof. They also represent many of the horrible things about the smart city concept. Surveillance of various kinds is pervasive. Selling is relentless. Meaningful public space is nonexistent. Speech is inescapable, but it’s not free. I was stuck in Stockholm-Arlanda for hours a few weeks ago and the thing that sticks in my mind is the way money seemed to evaporate off me like sweat for every minute I was there.

The problems at BER centre on the extraordinarily complex building services that shoot through every bit of the terminal down to each and every ticket desk and departure board. (My favourite thing there was the departure boards – they are mostly live and showing flights across the airfield at Schönefeld, almost as if to mock the project’s hubris.) The biggest single problem is fire safety, but the systems interact in complicated ways and it might be more accurate to say that the smart element of the whole thing is the problem. During the last-minute sprint to finish the job in 2012, the cable installation was done so badly it turned out to be impossible to say where all the runs were and what was in each trunk. They’re still re-wiring, hence the cables hanging out of walls.

Something nobody seems to discuss about it is software. All those sensors and effectors are linked physically by the cable network, but logically by the decision rules in the controllers. Even if it’s all done in Siemens-Rexroth programmable-logic controllers rather than general purpose digital computers, which seems unlikely in this day and age, this is still software of a kind. And the project is failing in a way that is spookily familiar from failing software projects. It’s not that far from the finish, but the finish always recedes. More money and more people seem to slow it down. The complexity of its management, rather than anything inherent in the task, seems to control its fate in as much as anyone or anything controls it. This is straight out of The Mythical Man-Month and the literature of the software crisis. It’s telling that, out of the contractors being paid on time and materials terms, one of the biggest earners is T-Systems, the IT consulting wing of Deutsche Telekom.

One of the biggest problems is that the systems don’t just need to work, they need to be shown to work. Essentially everything about it is subject to regulatory approval of one kind or another, and as the mayor who started it all, Klaus Wowereit said: Das ist auch gut so! This will be a huge problem for all kinds of Internet of Things projects. If something really matters, like fire protection, the way it works needs to be possible to understand, to demonstrate, and to take responsibility for. I am sympathetic to regulation. But I do wonder if the rural district council of Dahme-Spreewald is really capable of being BER’s regulator. This is their gloriously mundane HQ.

That said, perhaps it might do everyone good if they had to justify their code to a fire protection officer from a small suburban local government. Like this guy. (Actually he’s a town councillor.) Maybe, if BER is one day ever finished, Dahme-Spreewald should go global and export this. No as a Service.

So, this is your dumb smart future. Projects of all kinds that display the special pathologies of software projects. They are both deeply unaccountable, and also crippled by a profusion of veto actors. In so far as they work, they’re basically horrible environments riddled with creepy surveillance and yelling adverts demanding money, that are probably also insecure and unsafe…does that remind you of anything? The smart city dreamers wanted an urban infrastructure like the Internet, and dammit they’re getting one. BER’s architects wanted to create a single, integrated, monolithic building that would contain everything and be managed in the same way. The Siemens engineers saw it as a showpiece that would sell the systems they built there as a new product for similar projects around the world. Together, they created a monster, a building so soaked with software, marinating in the stuff, it’s literally impossible to finish. The only credible solution I’ve heard of is to strip the thing back to the structural skeleton and start again.

9 Comments on "What if reality was more like software? Visit to a failed smart city"