Back in the first week of the virus lockdown, before “non-essential” businesses were closed, I went to my local bookshop. Business, they said, was as good as Christmas with one important difference: rather than Boring Postcards-style toilet funnies and gifts for relatives you don’t actually know, people were buying serious literature they actually intended to read. Rather like the spectacular proliferation of dogs, it was a benign and indeed positive form of panic buying. In no particular order, here’s most of the stack of books I got through: 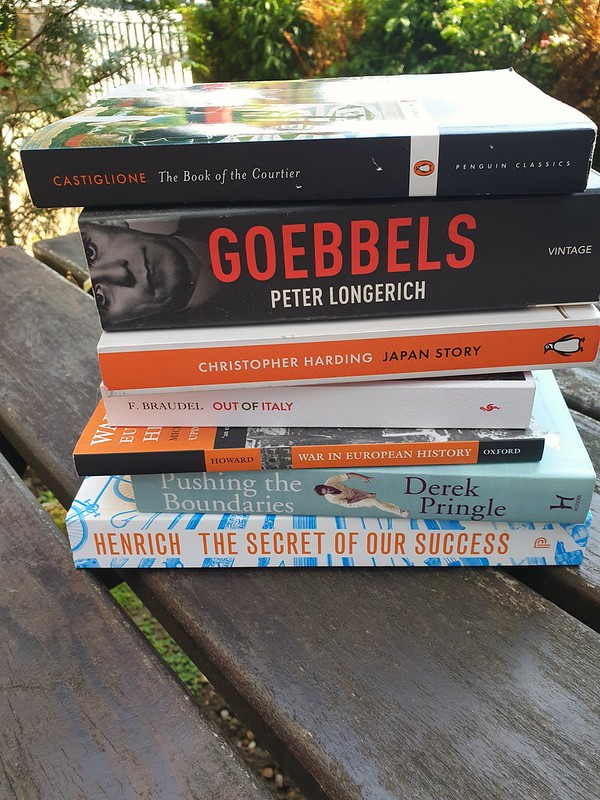 Joseph Henrich’s The Secret of Our Success is a popularization of his research project, which is to integrate the extensive set of tools molecular biologists have for understanding population genetics into anthropological research on cultural diffusion. The big idea is that cultural change is as important a factor in human evolution as genetics and in fact is a driver of genetic change. The ethnographic case-studies are incredibly fascinating – one thing that comes up again and again is that a lot of magical practices can be understood as practical solutions to problems where a mathematically optimal strategy requires a random element – and he’s enjoyably chastening to the caliper-wielding tendency. On the other hand, the book leans quite a bit on small-n social psychology experiments of the kind that fell victim en masse to the replication crisis, and I’m not quite sure about his use of historical sources compared to either fieldwork or experiments. There’s quite a bit of “ha! what use is your silly brain?” stuff that used to be fashionable. Worth reading but might benefit from a revision.

Baldesar Castiglione’s Book of the Courtier is a famous Renaissance text on the practice of being a courtier. It basically advocates something like my gloss on modern spin-doctoring here, the idea of fake nonchalance and naturalness as the supreme artifice, which is why it’s still read, as well as being a chemically pure sample of Machiavellian cynicism. Unfortunately as a reader you get page after page after page of self-congratulatory aristocrats exchanging tiresome persiflage, digressing, and dropping names – so many names the Penguin edition has six pages of dramatis personae and fourteen of explanatory notes.

Fernand Braudel’s Out of Italy, though, absolutely blew my mind with its synoptic sweep and rich detail, surveying the Italian Renaissance through culture, religion, politics, ideas, naval architecture, and financial market microstructure, while also taking the time to deconstruct what on earth “greatness” actually is. Quote:

An ideology cannot but be all-enveloping; its nature is to take over the individual and oblige him to submit to constraint, as he is in general only too pleased to. In short it is a kind of replacement civilisation, designed to repair the holes and fill the gaps in an existing civilisation now perceived as damaged or deficient. Logically it calls for enthusiasm, conviction, the certainty that one is right, and the lure of success. That it should consist of a bit of everything is logical too: the plaster used to patch up the cracks blends with what was already there

On the big swinging historian theme, I’d also decided to actually read more of Sir Michael Howard, having studied some of his chapters years ago and read The Causes of Wars, so here goes for War in European History. This is much as good as people say, framing the huge subject as part of the state-building process and finishing it by declaring Hiroshima as the end of European history; the ultimate act of war had been committed, and it had been committed by one extra-European power on another. The Eurocentric era was over. That said, Howard had to row back on this over the Balkans, which he managed by pointing to the US and Russia’s involvement (he adhered to the view that Russia isn’t in Europe).

My old professor Peter Longerich’s biography of Goebbels works by cracking open his voluminous diaries and chasing down the truth in the archives day by day, with a view to what the differences tell us about his inner life. This is good but I think I disagree with Longerich’s reading of how propaganda actually worked. Longerich argues that Goebbels’ rejoicing at the public reception of his staged mega-events demonstrates his self-delusion, as the reception was itself staged and he staged it. I disagree – in large part, the public reception of media events is itself experienced through the media, and intervening in this process is a powerful form of influence, especially in an authoritarian context where forming the wrong opinion of what just happened could be very dangerous indeed. Orchestrating the reception of propaganda events permitted Goebbels’ ministry to rig the so-called facts of social proof (harro-gloss).

Derek Pringle’s cricket memoir Pushing the Boundaries was this buy’s official random self-indulgence and pretty much demonstrates that 1980s cricketers could be classified on the two axes Brilliant-Mediocre and Human-Alien.

Christopher Harding’s Japan Story is a postmodern history of modern Japan that centres the effort to build a national myth that fits around a succession of radical disruptions – the wars that led to the Shogunate, the Tokugawa hegemony and the turn to autarky, the American intervention (itself a heavily mythologised event), the Meiji restoration, the era of the world wars, postwar boom, disenchantment and stagnation, and beyond. This is told through the life stories of a succession of people who defied the myth or tried to start counter-myths, including an amazing variety of creative (and occasionally destructive) weirdos. I’m not sure if this conveys the book well but it was really excellent and I’d recommend it to anyone.